The anti-realist urges us to regard the contents of the contracted world, and those of the ordinary and transfigured worlds, as on a par and equally real, by scaling down our sense of reality and weakening our concept of what it is for something to be real. This however is to ask us to return to the edenic situation of the ordinary world before it had undergone contraction, when all things ready-to-hand, it may be supposed, were experienced without differentiation as equally real.

But after the experience of contraction, things are experienced as having unequal degrees of reality, and this differential in the sense of reality is taken to validate the contracted criterion of reality, on the basis of which the contents of the ordinary and transfigured worlds come out as unreal. It makes the anti- realist demand, logically, like that of an empirical idealist who asks us to regard our experiences of perceiving external objects and our experiences of mental images as differing only with respect to their vivacity or some other phenomenal property, and not with respect to their veridicality.

If we retrace the steps that lead to the contracted world, we find that its implicit claim to have captured all of the content of the ordinary sense of reality, the plain sense of things, is illegitimate. Nothing obliges us to identify reality with its most contracted form.


There is nothing in the ordinary world that determines us to think that a world with less in it, a poorer world, is any more likely to be the real world than a world with more in it, a richer world: the ordinary world gives no instructions one way or the other on that point. The assumption that reality may be identified with whatever picture of the world tends to crystallize out of ordinary experience in any one particular direction, such as that of poverty, is either arbitrary or circular.

What is true of the experience of the contracted world - and this does make an irreversible difference to our sense of reality - is that it presents us with a luminously clear apprehension of what it is for something to be real, and thus with one paradigm of a real thing. But granting this does nothing to rule it out, or make it harder to think, that there are other things in reality than those that show up in the contracted world, which are just as real as, and real in the very same sense as, the contents of the contracted world, even though they cannot be experienced in the same way.

All of this Stevens himself spells out. This is our intimidating thesis. What it says is, first, that the particular experience of the rnind- independence of things which is characteristic of the contracted world is not that in which being real consists; and, second, that experience of the contracted world exemplifies only one, of perhaps indefinitely many possible ways of coming into contact with the contents of unconditionally mind-independent reality.

The crucial respect in which the 0 Basil Blackwell Ltd. The security of the ordinary world This realist strategy has, arguably, the air of being a metaphysical long-shot, but there is I think no satisfactory alternative as regards finding a philosophical analogue of Stevens' poetic project, or vindicating visionary romanticism in general. Supposing it hangs together, the question is, How much does it establish? Well, what it clearly does not establish is that the transfigured world, as opposed to the contracted world, is the real world. It does not show this, since all that has been shown is that there are strands in the ordinary sense of reality, the plain sense of things, that lead to the contracted world, and others that, via the medium of art, lead to the transfigured world; and that nothing in the ordinary world provides a non-arbitrary reason for identifying reality with the one world rather than the other.

It is true that transfigurative experience does not have the hardness of the contracted world, but it nevertheless supplies, by virtue of the distinguishing features of aesthetic experience, a kind of matching equivalent: it presents its objects in an aesthetically heightened light for which the same kind of cognitive, self-validating role may be claimed as for the hardness of the contracted world. This presumably is what underlies Bell's metaphysical hypothesis, that in significant form we are acquainted with 'the thing in itself'.


The fact, shown by art, that the transfigured world can evolve out of and is accessible to the ordinary world, shows that the ordinary world, its plain sense of things, contains within itself immanently the possibility of transfiguration as much as that of contraction. In this way, and in full accordance with Stevens' aspirations, art does what philosophy on its own cannot do: art presents the solution to the contracted world that philosophy is able only to think.

The mind, 'the most terrible force in the world', is also 'the only force that defends us against terror', 'that can defend us against itself'. The vindication of the transfigured world does not bring the cycle of seasonal experience to a halt, since we remain prey to fluctuations in our sense of reality.

The Plain Sense of Things

But it affords a new perspective on the cycle as a whole, which incorporates a new security in the ordinary world, and makes the existence of the metaphysical seasonal cycle as intelligible and acceptable as that of the cycle of natural seasons. Every imaginative transfiguration of reality will eventually fade - because it loses its freshness, and because we ourselves change - and the plain sense of things will return. No more is it an ironic resolution, since it does not require us to rise above our interest in truth and reality. What Stevens means is that, as said earlier, the transfigurative poem, as a work of art, does not have the right to refer to itself from the inside as a truth rather than a fiction; and that it cannot be known not to be a fiction.

But this is compatible with there being another perspective, which we can conceive and occasionally Basil Blackwell Ltd. I would like to conclude with some brief reflections on the metaphysical strategy employed by Stevens as I have interpreted him , which may help to give it interest and authority. Suppose that Stevens is correct in thinking that the concept of reality is primordial, and at a stretch capable of being projected from the plain sense of things to the visionary productions of art; and that it is inescapable, in that nothing issuing from the imagination has value if it cannot be regarded as falling under the category of reality.

This is already an interesting result. It encourages us to ask what structure the concept of reality has, that allows it to behave in that way. In answering this question we encounter difficulty, for there seems to be no obvious way of saying what it is about the notion of reality that gives it its plasticity, or why reality should be a condition on value. But one thing at least that seems to be shown is that there are two dimensions to the concept of reality: one which is connected with the independence of things from us, and another which is connected with the significance of things for us.

These appear to be independent and, indeed, to pull in opposite directions. What it would mean for the two dimensions to come apart is unclear. Presumably we would then be forced to deny that the concept of reality has the integrity which we ordinarily suppose.

The Plain Sense of Things

But in any case we seem to find it impossible to abandon either dimension of the concept of reality and, rather than allow the concept to disintegrate, somehow remain able to think that both dimensions may be satisfied, even though we do not understand truly how this can be. Note then that the route taken by Stevens, although realist in the sense that it Basil Blackwell Ltd. Stevens is far from the idea that the plain sense of things, our ordinary consciousness of an outer world, is transparent to itself and grasps its own place in the order of things.

Now for this line of thought - to the effect that the concept of reality has a structure which, once made explicit, results in a philosophical picture that is remote from the plain realism of commonsense - there is one outstanding philosophical model, namely transcendental idealism.

For Kant, there is a legitimate, albeit highly complex sense in which reality is both how things are independently from our experience, and necessarily congruent with our sense of significance or value.

Kant would concur with Stevens that we are prone to identify reality with a world that is metaphysically incapable of containing value, and that in order to locate value it is necessary to go over the head of the empirical world. Kant however attempts to say how value may be thought to have reality, and how the two dimensions of the concept of reality may be reconciled. Stevens does not concern himself with explaining, as opposed to presenting, the possibility of transfigur- ation. Does this mean that Stevens is not an implicit Kantian but a metaphysical realist, i.

Certainly that is one possible interpretation. Consequently the absence of a transcendental explanation of transfiguration in Stevens cannot be taken as evidence for interpreting him as a metaphysical realist.

"The Plain Sense of Things" by Wallace Stevens Essay Example

See Kermode , pp. Kermode regards such criticism as bordering on the ridiculous and likely to lower Stevens' standing as a poet. 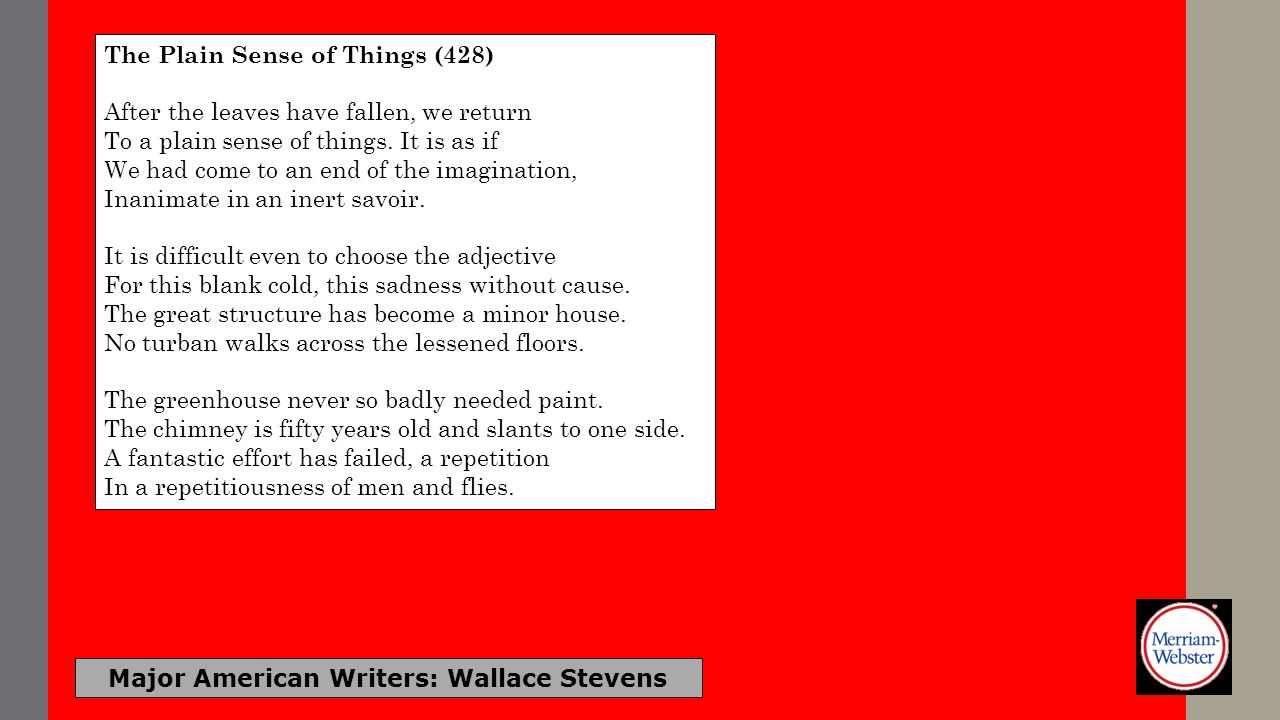 Blackmur , pp. Bell , pp. Quoted in Kermode , p. It was not accepted for publication. I' See Jarraway , p. That the world as a whole can fall within the scope of a work of art is a puzzling fact; it has perhaps something to do with that power of ours to take the world as an object, which, as Heidegger says, our capacity for mood reveals us to possess. A state of perplexity that Stevens evokes in frequent semi-paradoxical formulations, suggestive of uncertainty regarding the point of separation of reality and fiction.